From nothing to a VR app running in the browser in minutes.

As a WebXR focussed graphics engine, we try to make using the WebXR Device API through the Wonderland Engine as convenient as possible.

In this tutorial, we will set up necessary components for VR headset and controller inputs.

We continue where we left off in Getting Started.

Once the VR mode is entered after the user pressed the “VR” button on the bottom right of the screen, the Wonderland Engine autmatically starts rendering in stereo.

“Stereo” means that there is two views rendered: One for the left and one for the right eye. The opposite is “mono”, which is a single view.

Up till now, we had only one view set up, which represents either the “center eye” for mono rendering, or in stereo would represent the left eye.

We need to add a second view to allow the right eye to be rendered aswell. For that, we add a second object “RightEye” with a view component, as we want the left and right eyes at different positions eventually.

Since we still need a single object to control the player position, we add a common root for the left and right eye called “Player”. This way we only have to move one object rather than each eye individually. 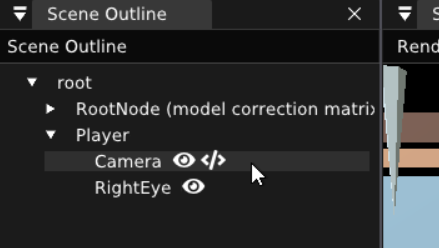 To make the camera follow the user’s head, you need to add “input” components. Input components read various forms of input and apply it to the object they are added to.

To both “Camera” and “RightEye” add a input component each, with the type set to eye left and eye right. 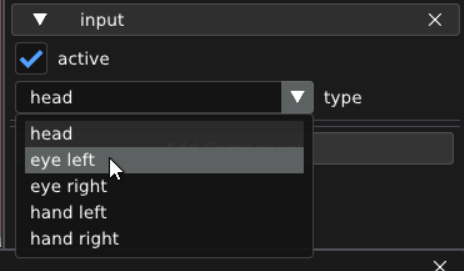 The position of the two view objects is now controlled by the input component. To avoid confusion, we reset the position of “Camera” and move “Player” to the desired position instead. Do that by selecting “Camera”, then double click each translation input field and type 0.

Finally, select “Player” and use the translation Gizmo to move it to a position infront of the house.

Click “Package” and “Start Server”. That starts the local webserver which will serve the game page.

Follow Chrome’s guide on how to remote debug devices.

In case the Oculus Quest does not appear, you need to run adb devices to get the adb-server started. Adb comes with the Android Platform Tools.

Now that our application renders in the browser, the next step is to receive some input.

Download quest_controllers.glb, low-poly Oculus Touch v2 controller models by Jezza3D, that were imported into blender and exported as glb with some modification to their transformation.

Put the new file into the assets folder in the project’s directory.

After right-click > Refresh in the “Asset browser”, you can now drag and drop it into the scene.

Make sure to reparent both objects to “Player”.

Add an input component to each of the controllers and set the input type to hand right and hand left accordingly.

After clicking “Package”, your controllers should now be visible in VR!